Like larger particles, heavier particles are less mobile in solution and decrease the rate of diffusion. In a solution, the solute is the substance that you want to dissolve and the solvent is the media that dissolves the solute. In the case of cells, water is the major constituent and it is the main solvent where substances are dissolved to be able to participate in reactions.

Osmosis is a special form of diffusion where the water concentrations of two solutions separated by a partially permeable membrane reach equilibrium. This equilibration happens when water molecules move from the most concentrated solution to the least concentrated one.

In the case of cells, osmosis can occurs as cell membranes are semi-permeable. The following three situations may happen: 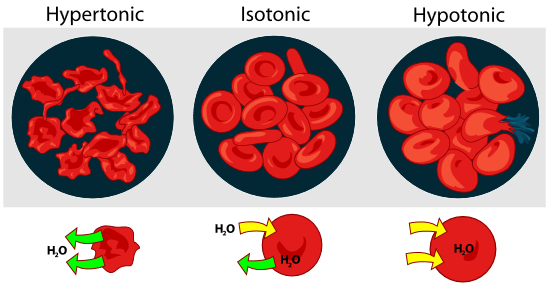 Water potential (ψ) quantifies the tendency of water to move from one region to another, such as in osmosis. It is the sum of several potentials including the pressure potential (ψp) and solute potential (ψπ).

The solute potential (ψπ) can be calculated with van't Hoff equation: ψπ = i∙C∙R∙T

Where i is the van 't Hoff factor or ionization constant (ratio of particles in solution to amount dissolved), C is the molar concentration of the solute (mol/L), R is the ideal gas constant (0.00831 L∙bar/mol∙K), and T is the absolute temperature (K). Notice that ionization constant is 1 for molecules that do not ionize when dissolved.