Just like the Michealis-Menten equation, this equation can be rearranged to fit a double-reciprocal plot: 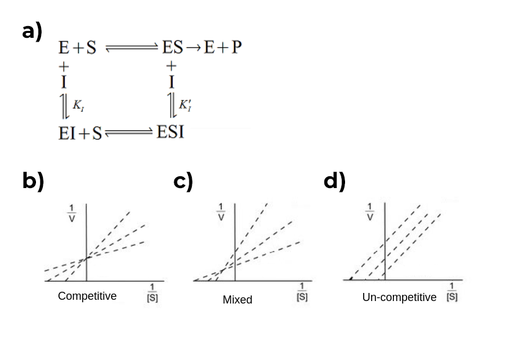 The enzyme alcohol dehydrogenase is not completely specific for ethanol; it also catalyzes the formation of aldehydes from other alcohols. One of these alcohols is methanol, which is metabolized into formaldehyde and other toxic compounds that can cause blindness or death [3]. Methanol poisoning is quite common, and can be caused by the ingestion of homemade alcohol. Methanol and ethanol are thus competitive substrates, and ethanol is actually used to prevent poising after the ingestion of methanol, because it inhibits ADH in catalyzing the oxidation of this compound [4].

See the following pages for details of how to calculate the kinetic parameters for different inhibitors: