PCR is a method used to prepare billions of copies of specific DNA sequences. It is often necessary to have a larger number of copies of the specific DNA sequence than that found in a typical sample to analyze DNA for its base-pair sequence or length. In addition, the PCR reaction is highly specific, meaning that it will only produce copies of a desired sequence from the template (sample) DNA. This specificity is ensured by the primers, which are designed to be complementary and anneal to specific regions on each side of the DNA region of interest (target region). These features make PCR a powerful technique to be used, for instance, in genotyping of markers, before sequencing, or in various DNA tests. 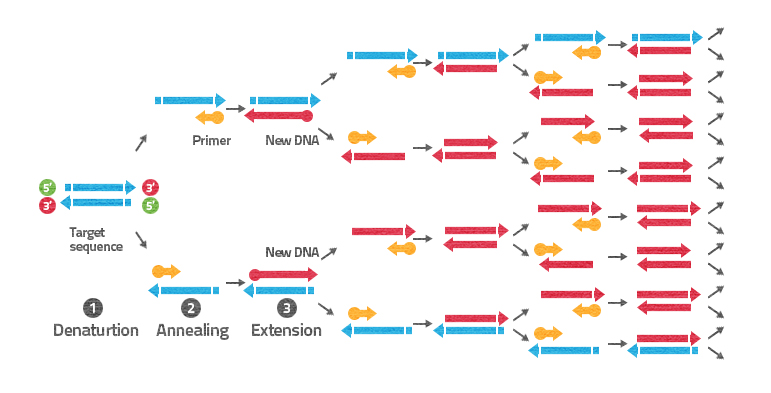 By the end of one cycle, parts of the initial DNA strands have been doubled in number. By the end of, e.g., 30 cycles, usually performed in PCR, at least 1 billion (230) copies of the target sequence will be present in the tube. For performing PCR, you need to add a thermostable DNA polymerase, nucleotides, primers, and DNA you want to use as your template.

When preparing for a PCR experiment, you must be extra careful of potential contamination. PCR is a very powerful technique to amplify DNA. This means that if you have a tiny contamination (for example, DNA coming from other sample), this DNA can also be amplified, competing with the original template and destroying your experiment results. To prevent contamination, you need to always use gloves and work in a very clean environment (change the pipette tips when you are pipetting from a different container, tie your hair, do not cough or sneeze around the PCR workbench, and others).