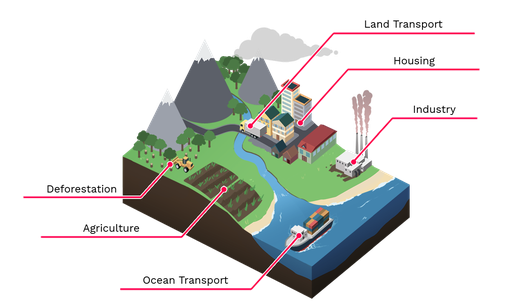 Industrial activities
Industry has been a major driver in population growth, kickstarted by the industrial revolution in the 1780s. Many industries burn fossil fuels (such as coal, gas, and oil) for energy. This process releases carbon dioxide, methane, and other greenhouse gases into the atmosphere. Greenhouse gases are also produced as a byproduct of certain industrial practices. Some industries also release more potent greenhouse gases, such as fluorinated carbons, which have a higher warming potential than other gases, such as carbon dioxide.

Housing
Cities, towns, and villages were also pillars in creating today's societies, providing us with housing and amenities. Similar to industry, the electricity and gas we use to heat our homes, charge our electrical devices, and cook our food is often provided through burning fossil fuels.

Transportation
Transportation, such as cars, trucks, and ships, often require fossil fuels for power. Large cargo ships were an essential part of the industrial revolution, allowing goods to be shipped globally. Today, transport is used in almost every corner of the world. Although ships and airplanes burn more fossil fuels than other vehicles, on-land vehicles release more greenhouse gases globally combined.

Agriculture
Livestock farming and crop production both contribute to climate change. Large livestock animals, such as cattle and pigs, release methane as a byproduct of digestion. Fertilizers are commonly used in crop production to produce greater yields, however, they also release nitrous oxide into the environment.

Deforestation
Forests are one of the largest carbon stores on Earth. This means they remove carbon dioxide from the atmosphere and store it for long periods of time. Deforestation decreases the amount of forests, therefore decreasing the amount of carbon that can be stored. Also, the leading cause of deforestation is land-use change, where forests are replaced by industry, housing, agriculture, or roads for transportation.