Atmospheric circulation describes the pattern in which air flows around the Earth. Each hemisphere is split into three convection cells, shown in the tricellular model below.

Due to the sun’s position relative to the Earth, the equator receives the most direct sunlight and the southern hemisphere receives more sun than the northern hemisphere due to the Earth’s tilt. The poles receive a low angle of incoming sunlight which is scattered over a large area, resulting in a much colder climate. Without atmospheric circulation, the equator would be much hotter and the poles would be much colder. The movement of air disperses heat to different regions around the Earth, influencing local climates and biomes.

Each cell also causes particular prevailing winds which blow eastward or westward. The reason the winds do not blow directly from north to south (or vice versa) is due to the Earth’s rotation, in a process known as the Coriolis effect. 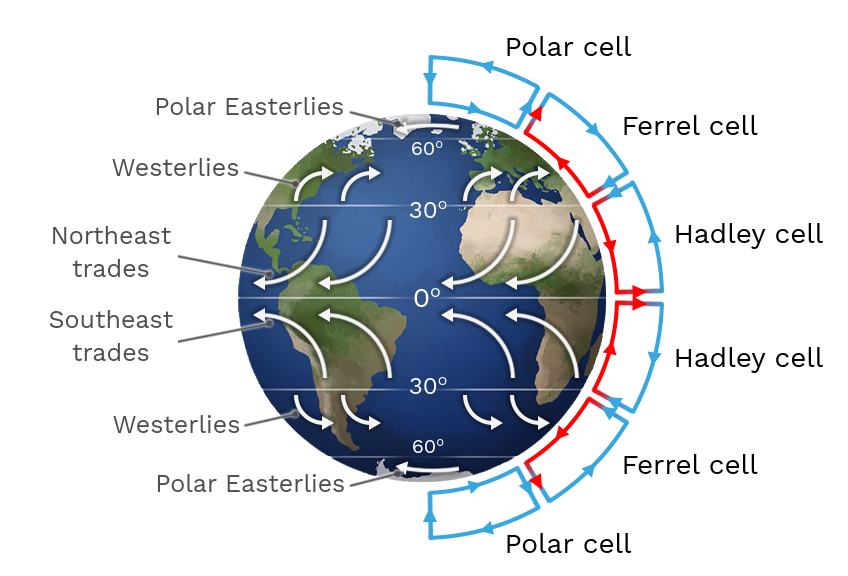 Hadley Cell
As sunlight is more concentrated at the equator this heats the Earth’s surface, which warms the air. As air warms its density decreases causing it to rise, creating an area of low pressure. The air that rises at the equator reaches the tropopause (boundary of the troposphere), splits and travels poleward (both north and south). At around 30° the air cools, becomes denser, and sinks, creating high pressure. The sinking air travels towards the equator to replace the warm, ascending air, completing the closed circulation loop. The Hadley cell forms the northeast and southeast trade winds.

Ferrel Cell
The Ferrel cells are not driven by temperature (like the Hadley and Polar cells) and they flow in the opposite direction. A large part of the energy that drives the Ferrel cell is provided by the Polar and Hadley cells circulating on either side, which drags the Ferrel cell with it. As surface air in these cells flows away from the equator the Earth’s rotation deflects the air to the east and forms the westerlies.

Polar Cell
The Polar cells are the furthest cells from the equator and have the coldest climate. The warm air that travels to the poles from the Ferrel cells cools and descends at the highest latitudes, creating a dry, high-pressure area. The air circulation of the polar cell is caused by cold air sinking at the poles and flowing towards the mid-latitudes, producing sporadic winds known as the polar easterlies.