In anatomy and physiology terms, movement can be described as a result of contraction or relaxation of the muscles that are attached to the bones across joints. The type of movement depends on the mobility of the joint and the position of the muscles in relation to the joint.

There are plenty of examples of the action of muscles on bones that create a movement - the most obvious ones occur at the joints of the limbs. The less obvious include less freely movable bones, like the vertebrae’s movements when bending to one side. In general, the movements are described concerning the anatomical position of the body - an upright stance, with upper limbs to the side of the body and palms facing forward.

The most common types of body movements include:

1. Flexion
This movement decreases the angle of the joint and brings two bones closer together. Example: bending the elbow or bending forward

2. Extension
The movement that is opposite to the flexion - it increases the distance between two bones or parts of the body. Example: straightening the knee or elbow.

3. Abduction
Abduction happens when there is a movement of a limb away from the midline, or median plane, of the body. Example: raising the arm or fanning the fingers.

4. Adduction
The opposite movement to abduction makes the limb move towards the body midline, just like ‘adding’ a body part by bringing it closer to the trunk. Example: lowering down a raised arm.

5. Rotation
Rotation describes a movement of a bone around its longitudinal axis, very common for ball-and-socket joints. Example: shaking the head in a ‘no’ gesture.

6. Circumduction
The combination of flexion, extension, abduction, and adduction movements, where the proximal end of the limb is stationary, and its distal end moves in a circle. The movement of the limb outlines a cone. Example: doing big arm circles 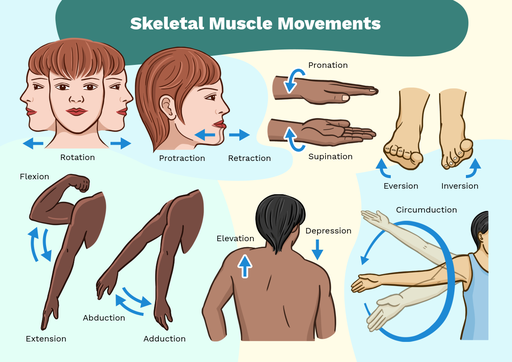