The central nervous system consists of the spinal cord and the brain, which are physically one unit and are the command centers of the nervous system. 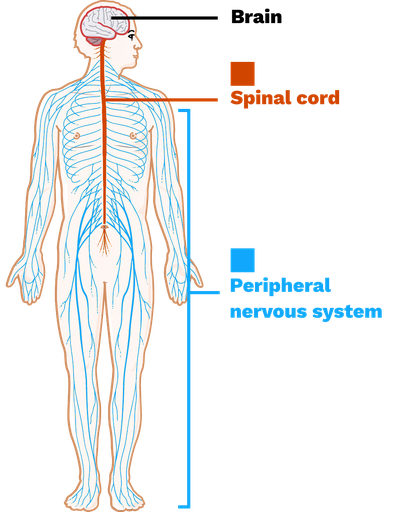 The human brain is generally divided into the following main parts: the cerebrum, the cerebellum, the diencephalon, and the brainstem. The brain is responsible for multiple cognitive functions and has a role in regulating your movement, your body’s homeostasis, the endocrine balance, and vegetative functions.

The spinal cord is a long tubular structure of nervous tissue present within the vertebral canal. It extends from the brainstem, throughout the entire body, down to the lower back (between the first and second lumbar vertebrae). It consists of four main regions: cervical, thoracic, lumbar, and sacral. The main function of the spinal cord is to accept and pass on the electrical signal from the brain to the peripheral nervous system (PNS) and another way around, from the PNS to the brain.