The cerebral cortex has functionally different areas, which we separate into five lobes: frontal, parietal, occipital, temporal and the insula.

Functionally different areas are also referred to as “Brodmann areas”, named after a German neurologist who divided the cortex into 52 separate areas that have different cell compositions.

Interestingly, there are also functional differences between the two hemispheres called hemispheric lateralization. The degree of the asymmetry in functions is dependent on each person and usually varies a lot with gender. A good example of lateralization is language functions, such as understanding written and spoken language, which are generally more prominent in the left hemisphere. However, the right hemisphere is more likely to be responsible for visual, and spatial skills. 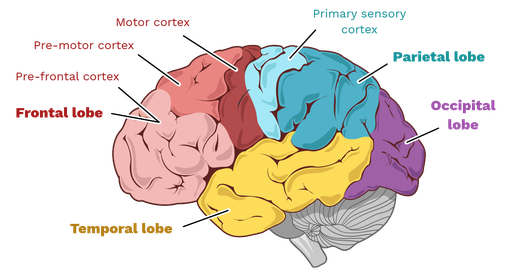 Figure 1: Five lobes of the brain