The cerebrum is the largest and most superior part of the brain. It is responsible for the perception and integration of sensory information, control of motor functions, and complex functions such as language, memory, and personality.

Gray matter in the CNS consists mainly of the cell bodies of the neurons, while the white matter is built up of mainly myelinated axons, which also gives it its whiteness.

The surface of the cerebrum has a wrinkled, walnut-like appearance. The folds are called gyri (singular: gyrus). The deep furrows between gyri are called fissures, while the shallower furrows are called sulci (singular: sulcus). Many of the sulci, fissures, and gyri are important anatomical landmarks, such as the longitudinal fissure, that divides the cerebrum into the left and right hemispheres. These hemispheres are connected by a thick bundle of axon fibers, the corpus callosum, which allows communication between the two hemispheres.

The sulci and gyri can also be used to help identify the locations of the five lobes of the cerebral hemispheres: frontal, parietal, occipital, temporal and the insula. 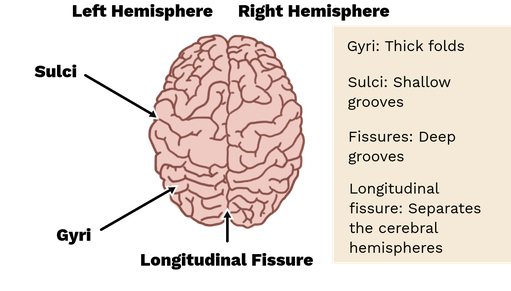 Figure 1. Structures of the cerebrum