FIA can be used to determine the level of caffeine in various types of beverages. However, this can be a challenge. Together with caffeine there are many other ingredients, for example, coffee, which can interfere with the result.

After pretreatment, we now have a coffee solution that does not contain polyphenols. However, theobromine is still in the solution which is chemically and physically very similar to caffeine. The only difference between the two molecules is an additional methyl group residing on caffeine, but not theobromine. This makes theobromine much less soluble in water than caffeine. Therefore, the two are separated in the FIA system mixing coil by using the appropriate solvent - though only after the polyphenols are removed with PVPP.

The first part of the figure, as indicated by (a) shows an analysis on samples that are pre-treated with PVPP, removing all polyphenols before being run in the FIA (2,4,5 and 6). Next, the FIA is capable of separating theobromine (1) and caffeine (3). It is the area under the two peaks that is a measure of the concentration of the two substances.

The rearmost of the two graphs, as indicated by (b) is an analysis on samples that are not pre-treated with PVPP. Accordingly, several peaks are visible. These are peaks of polyphenols, and consequently, 1 and 3 are not separated. 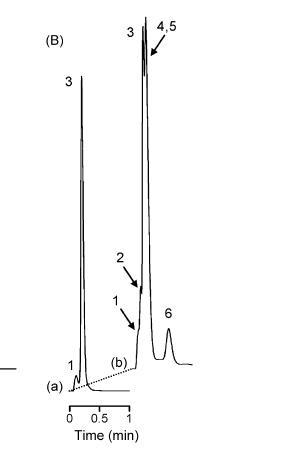 The figure therefore shows how important it is to pretreat samples with PVPP.