DNA is composed of two strands twisted together, also called the double helix. 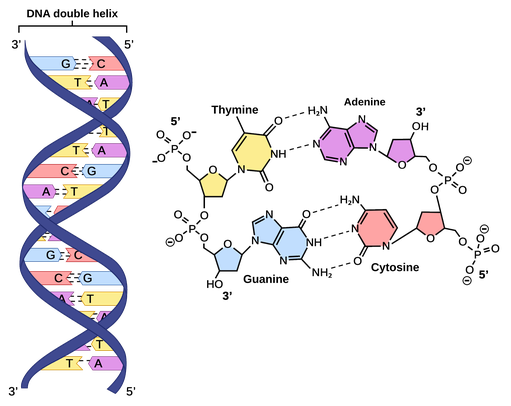 The double helix is said to be antiparallel because one strand runs in the 5′→3′ direction and the other runs in the 3′→5′ direction. 5' and 3', refer to the number of the carbon molecules in the sugar backbone (Figure 1). The 5' carbon has a phosphate group and the 3' carbon has a hydroxyl group.

The strands are composed of nucleotides: a sugar molecule (deoxyribose in DNA, ribose in RNA), a phosphate group, and a nitrogen-containing base.

A phosphodiester link connects the nucleotides with each other. The two strands are bound with weak hydrogen bonds between the complementary nucleotides. The nitrogenous bases are “inside” like rungs on a ladder.