A control is a comparison.

Imagine you are standing on a hill, which is surrounded by several other similar hills and you start wondering if it would be possible to climb one of those nearby hills with your shoelaces tied together – an obvious thought when one looks at a beautiful panorama!

Luckily, you don’t have to wonder for long because you are accompanied by three boy scouts.

You choose the following experimental setup.

Each boy scout will walk up a hill and light a fire as soon as they reach the top. This way you will be able to see and record the result from a distance.

You are a skilled scientist and know that you have to introduce controls to support your results. Using experimental controls is the way of knowing if your results are due to the variable you are testing, or caused by the experimental procedure itself. 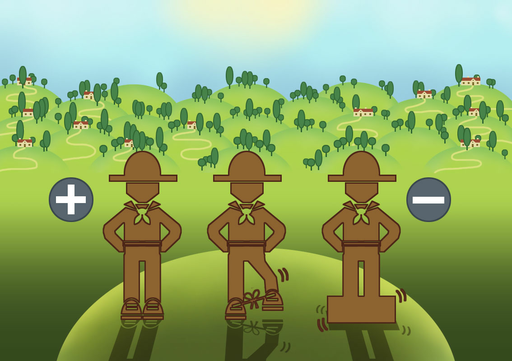 Following the example, you have no idea what awaits your little boy scouts down in the forest. There could be a river or a hungry bear in that valley. You would never know if it were the tied shoelaces that stopped them from making the fire or something else. To avoid such uncertainties, you decide to send off one of the boy scouts as a positive control. You won’t tie his laces together. This should guarantee that he would be able to make it up to one of the hills and light a fire. If there is no fire on that hill, you know there is something wrong with your experimental setup. This is an excellent positive control.

For creating your negative control, you become very creative and find an interdisciplinary approach directly from the Mafioso Repertoire. You fill a bucket with concrete and use it to immobilize one boy scout. You know with such a weight on his feet he might be able to hop down the valley, but he will never make it up the other hill.

Again, you have no idea what will happen down in that valley. You ensured that the shoes of all your boy scouts are well tied and can’t be easily taken off. But in the case they do find a way to take off the shoes and walk up barefoot, you know the boy with his cement shoes would do the same and there would be a fire on his hill as well.

Perfect, this is all you need to run the experiment. With such an excellent setup, you can lean back and wait for the fire signals.

Whatever experiment you are performing, you should always come up with good controls that are truly comparable to the experimental sample. Sending the positive control off with a helicopter would be a useless positive control, just like tying the third boy scout to a tree would be a bad negative control.