Radioactive decay is a process where an unstable nucleus ejects material to become more stable. The three types of radioactive decay are alpha, beta, and gamma. These decays are shown in figure 1.

In alpha decay, a nucleus that is too large to be stable will release an alpha particle, consisting of two protons and two neutrons. The resulting nucleus has two fewer protons and two fewer neutrons and is therefore more stable.

An alpha particle is sometimes referred to as a helium nucleus as they look exactly the same.

In beta decay, a nucleus with too many neutrons to be stable will convert a neutron into a proton. As a consequence, the nucleus also emits a fast-moving electron known as a beta particle.

In gamma decay, a high-energy photon is emitted from an unstable nucleus. This lowers the energy of the nucleus, so it becomes more stable. 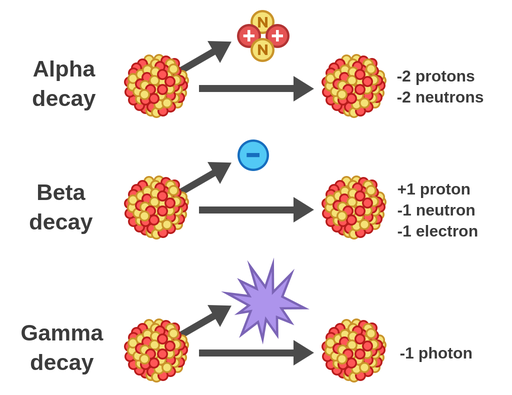