The polyacrylamide gel is divided into two parts, the stacking and separating gel, which work together with the running buffer to create a discontinuous buffer system. The discontinuous buffer system relies primarily on the changing state of glycine, whose charge is dependent on the pH of the solution that it is in and the difference in density between the two gels. The stacking gel has a lower percentage of acrylamide and a lower pH (6.8) than the separating gel (pH 8.8). Each gel layer has its own function.

The stacking gel’s main function is to line up the samples, so they enter the separating gel at the same time. The lower percentage of acrylamide in the stacking gel creates larger pore sizes, allowing the proteins to move more freely than in the separating gel. The lower pH of the stacking gel allows for glycine to be neutral, having both positive and negative charges. This reduces its ionic strength, moving it more slowly from the negative cathode to the positive anode in the electrophoresis chamber. In contrast, the negatively charged chloride ion in the gel and sample buffer move at a faster rate towards the anode. This creates a voltage gradient between the fast moving chloride ion and slower moving glycine. Within these extremes is the electrophoretic mobilities of the proteins, so the proteins are effectively herded through the stacking gel between the chloride ion and glycine, lining them up before hitting the separating gel.

The separating gel separates the proteins based on molecular weight. At a pH of 8.8, the glycine becomes negatively charged, as a glycinate anion. In this state, it is pulled more rapidly towards the positive anode, moving past the proteins. Because the proteins are affected by the density of the acrylamide, they slow down. Without the voltage gradient from the chloride and glycine ions, they can also separate based on their molecular weight as they are caught in the gel. 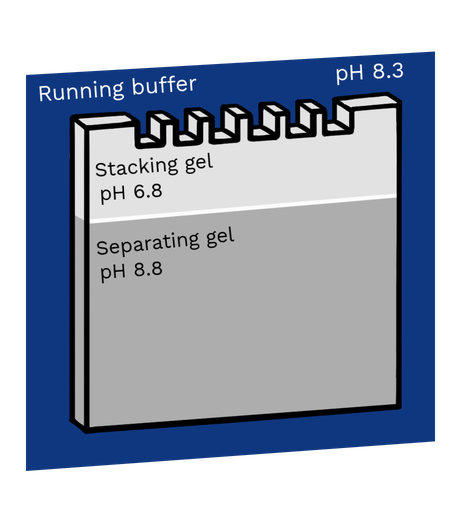