The Gram stain is a differential staining technique that differentiates nearly all bacterial species into two large groups, based on structural differences in the cell wall.
The cell wall is essential, as it protects and shapes the bacteria, and is involved in inducing disease in the infected host. It can also be a target for certain antibiotics. The gram staining takes no longer than several minutes to perform and analyse the bacterial sample.

The Gram stain does not identify individual species within a group, and to do this, we would need to run additional microbiological tests.
Still, the Gram stain is widely used as it allows an experienced microbiologist to detect the presence of bacteria, and decide if a bacteria is
Gram-positive or Gram-negative, in a matter of minutes.
Knowing the Gram type, and seeing the morphological shape of a bacteria aid in selecting the initial antibiotic needed to treat a patient. 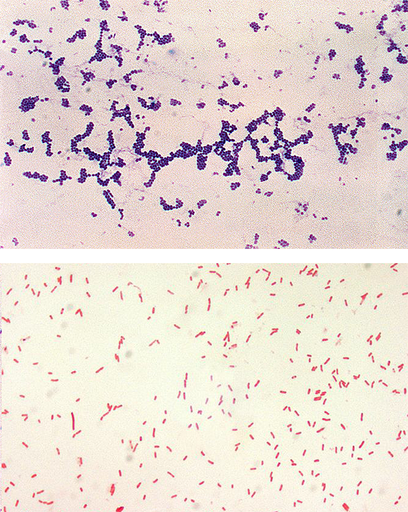