Kepler’s second law of planetary motion explains how planets move along their orbits. It is also called the law of areas. It states that:

A planet sweeps equal areas of its orbits in equal intervals of time.

Kepler’s second law tells us that a planet moving in an elliptical orbit can’t always travel at the same speed. A planet is slower while it is far away from the Sun and faster when it is closer. 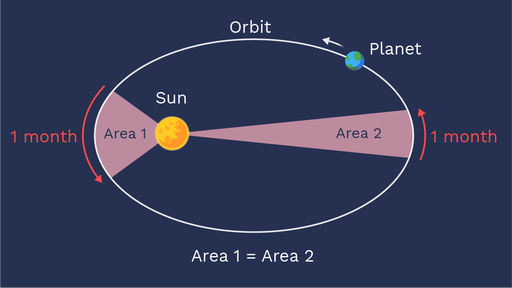 Figure: An imaginary line joining a planet to its star sweeps sections of its orbit of equal areas during equal intervals of time. If the planet is closer to the star, the section is shorter, so the planet travels a bigger arc in that amount of time. That way, the total area is the same as when it is farther from its star but covers a smaller arc.