If we hold an object completely below the surface of the liquid (e.g. underwater), we have seen that the buoyant force on it depends on its volume Vobject and the density of the fluid: FB = ρfluid · Vobject · g

If this weight is greater than the buoyant force, it will sink below the surface.

Rearranging and canceling the “g”, we find the condition mobject /Vobject > ρfluid. On the left side, the mass of the object divided by its volume is just its average density, ρobject.

So we can write for an object that sinks, ρobject> ρfluid, i.e., if the object’s density is greater than the liquid’s, it will sink to the bottom.

This means that if the object’s average density is less than the liquid’s it will rise up and float on the surface. 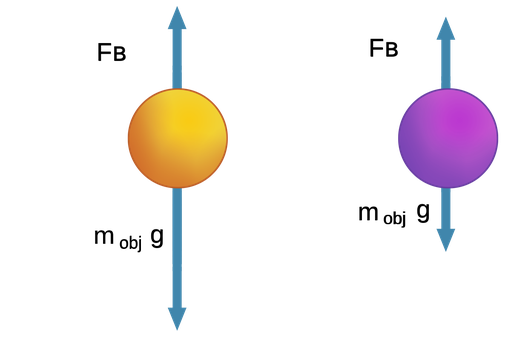