Tectonic plates move approximately 2 to 3 cm each year and convection currents drive this movement. Although the mantle is predominantly solid, much of it moves like a viscous liquid or pliable plastic. 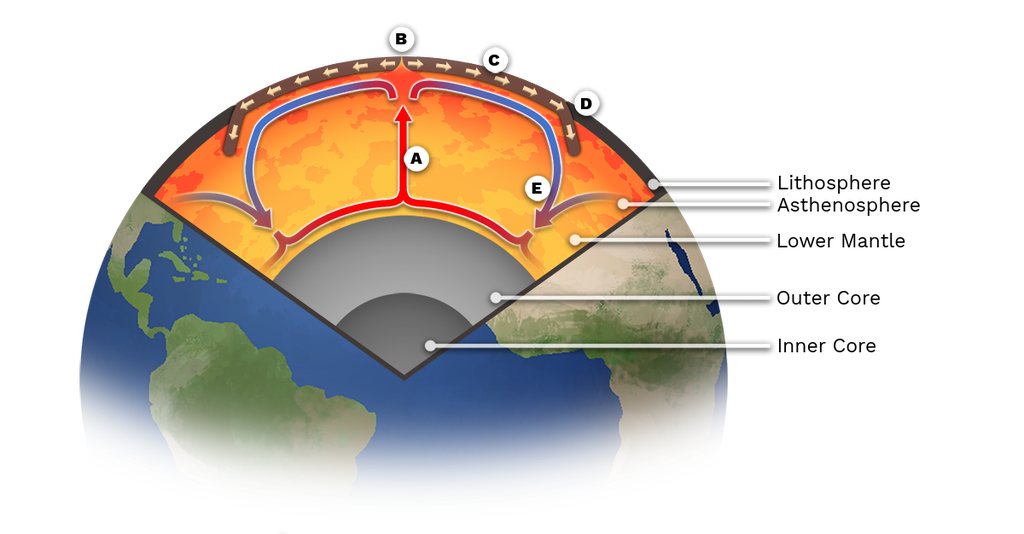 The Earth’s core and mantle produce heat through radioactive decay. As the mantle is heated it reduces its density which causes it to slowly rise (Fig. 1 - A) until it reaches the asthenosphere. As it cannot pass through the crust above it is forced sideways. The movement of the flowing asthenosphere against the lithosphere causes friction and movement of the plates (Fig. 1 - C). While traveling sideways the mantle material cools once again, becoming denser and sinking down towards the lower mantle (Fig. 1 - E). This process repeats in a continuous cycle.

The forces caused by mantle convection can split the lithosphere (Fig. 1 - B) allowing magma to rise (divergent plate boundary). As it cools, it forms new oceanic crust. As the ridge is the highest part of the plate, there is a gravitational pull that causes the plates to move away from the ridge. This force is called ridge push. Slab pull is another process contributing to the movement of tectonic plates (Fig. 1 - D) where denser, cooler plates are subducted below less dense plates (convergent boundaries). The subducted plate pulls the trailing slab into the subduction zone like a tablecloth pulling tableware off a table.