There are several different platforms of Next Generation Sequencing, and each of them utilizes a different technique of performing DNA sequencing. In this case, we will focus on the reversible dye termination technology employed by Illumina: sequencing by synthesis. This implies that the sequencing data is obtained by synthesizing each base pair.

After the cluster generation, we are ready to begin the sequencing process. Let us go through the process in detail.

Once we have the cluster of clonal DNA attached to the flow cell, sequencing reagents are pumped into it. They enter from one side of the flow cell and exit on the other side. T4 DNA polymerase is flushed in and attaches to the short DNA molecules bound to the flow cell. 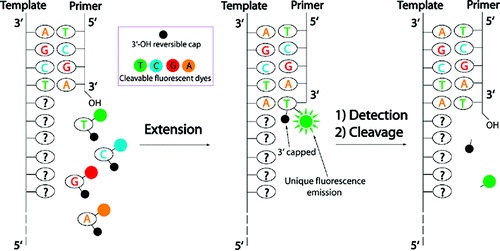 Figure 1. Sequencing by synthesis. After the polymerase has attached to the primer, nucleotides labeled with a specific fluorophore will be added at the 3' end of the primer. The nucleotides are modified with a 3' cap that allows only one nucleotide addition at a time. The fluorescence signal emitted by the fluorophore is detected, and the 3' cap is cleaved allowing, the next sequencing cycle to begin. Nucleotides tagged with fluorophore

Because all the nucleotides are individually labeled with a specific fluorophore, we can identify the nucleotides by observing the fluorescence signal that they emit. For example, in Figure 1 we can observe that one nucleotide tagged with a green fluorophore has been added at the 3' end of the primer. A chemical reaction triggers the emission of the green light that can be recorded by taking a picture. Because we know that Thymine is tagged with the green fluorophore, we can identify the base as Thymine. Four pictures are taken at the end of each cycle, recording each of the possible colors. After taking all four pictures, the system will overlay them. Therefore, we can easily identify the base identity of each cluster (see Figure 2). 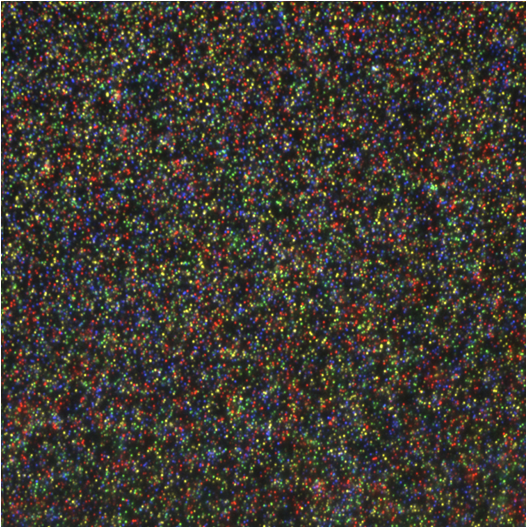 After sequencing, the images are fed into a computer and the sequencing data can be analyzed with an specific software.