In 1905, Albert Einstein proposed his photon model of light to explain the photoelectric effect. In this theory, light consists of individual packets of energy called photons. A beam of light can then be thought of as many separate photons each carrying a specific amount of energy, rather than a continuous stream of energy. When a photon is absorbed it transfers all of its energy at once.

Photons are massless and travel at a speed of 300,000,000 m/s in a vacuum. They have wave-particle duality, which means they show both wave-like and particle-like behavior. They act as individual particles when interacting with matter - for example, during the photoelectric effect - but act as electromagnetic waves - capable of diffraction, interference, etc. - when propagating through space. This means that photons have a frequency and a wavelength. The energy of each photon actually depends on its frequency, with higher frequency photons being more energetic. 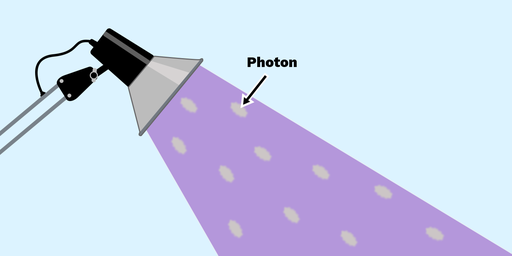