The photoelectric effect is the ejection of electrons from a surface when it is illuminated by a light source. This process is called photoemission and electrons emitted in this manner are called photoelectrons. This phenomenon can be observed and tested by shining monochromatic light (which contains only one frequency) on a negatively charged metal plate.

In order to escape the surface, the negatively charged electrons must have enough kinetic energy to overcome the attraction from the positive ions in the metal. This energy is supplied by the incident light. We refer to the minimum required energy for an electron to escape the surface as the work function. Its value depends on the type of metal. It is often given in terms of electronvolts, eV, where 1 eV is equal to 1.6 × 10−19 Joules.

In the early 1900s, it was widely accepted that light could be thought of as an electromagnetic wave, as predicted by James Clerk Maxwell. However, there were still several phenomena that could not be explained by this wave model of light, including the photoelectric effect. After a careful study of the effect in 1905, Albert Einstein presented his photon model of light which could explain the photoelectric effect. In his theory, he instead described light as individual packets of energy. This theory lead us to the concept of wave-particle duality in light, where light can show both wave-like and particle-like behavior. Einstein was awarded a Nobel Prize in Physics in 1921 for his explanation of the photoelectric effect. 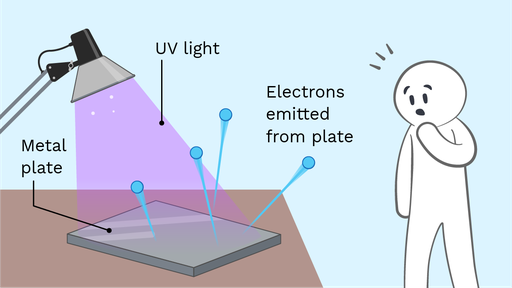