The method to name and distinguish two stereoisomers was created by three chemists: R.S. Cahn, C. Ingold and V. Prelog. This set of rules, often addressed as Cahn-Ingold-Prelog rules, distinguishes the enantiomers based on their optical ability to deviate light and is often referred to as R/S optical rotation system. By assigning priority to the different groups connected to the central carbon, a stereoisomer can be classified as S if the arrow from the highest priority group to the second-highest moves in a counterclockwise direction, otherwise is classified as R if the arrow moves in a clockwise direction.

The steps to assign R/S configurations are the following: 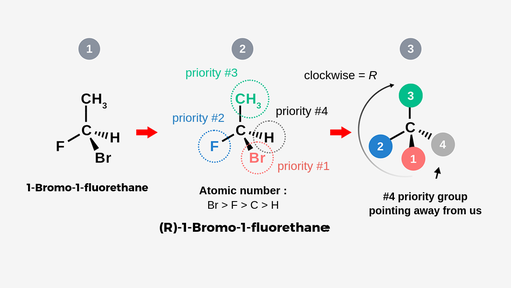