The prostate gland is about the size of an egg and found outside the base of the bladder. It secretes prostatic fluid during ejaculation.

The prostate gland is a single gland that surrounds the proximal portion of the urethra, called the prostatic urethra, and the right and left ejaculatory ducts. It consists of glandular tissue that conveys a secretion to join the sperm during ejaculation through small ducts that are scattered throughout the prostatic urethra. 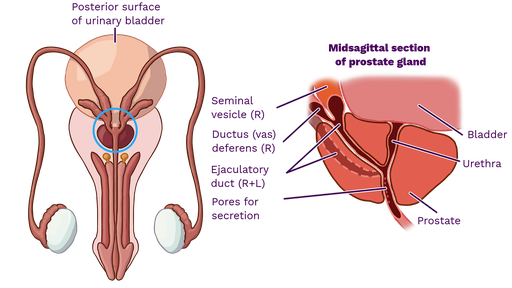 The alkaline secretion of the prostate gland is part of semen. It supports sperm viability outside of the body. The secretory fluid contains citrate that can be used by sperm as a nutrient. It also contains prostate specific antigen, known as PSA, that helps sperm escape the temporary coagulation of semen. Additionally, the secretion contains substances that protect sperm from bacterial infection.