Not all genes are constantly expressed in all cells. A cell must transcribe the DNA sequence into mRNA in order to produce the encoded protein. Therefore, the level of gene expression corresponds to the level of mRNA. Gene expression can be measured using a reverse transcription polymerase chain reaction (RT-PCR). RT-PCR is comprised of these steps: 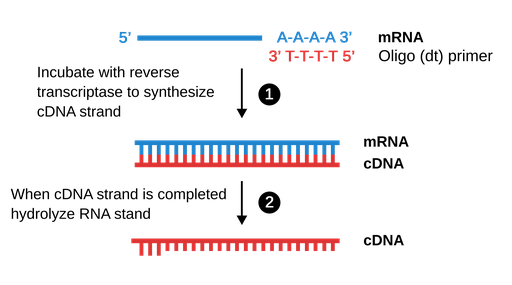 Figure 1. Steps to create cDNA from an mRNA template. Using an Oligo(dT) primer, mRNA is reverse transcribed into cDNA, followed by hydrolyzation of the RNA strand.

mRNA is more fragile than DNA and cannot be amplified by PCR. For that reason, mRNA is converted into complementary DNA (cDNA). cDNA is DNA that is synthesized from messenger RNA molecules. cDNA synthesis is catalyzed by an enzyme called reverse transcriptase, which uses RNA as a template for DNA synthesis. Reverse transcriptase was initially discovered and isolated from a retrovirus. These viruses contain an RNA genome; therefore the viruses need to produce a cDNA copy of their genome to be compatible with the host cell's molecular machinery.

At the end of the RT-PCR reaction, there will be billions of copies of the gene of interest if the gene was expressed. The amount of DNA copies can be visualized by gel electrophoresis.