RNA, just like DNA, stores information in four bases: A (adenine), U (uracil), C (cytosine), and G (guanine). Unlike DNA, the thymine bases are replaced by uracil. 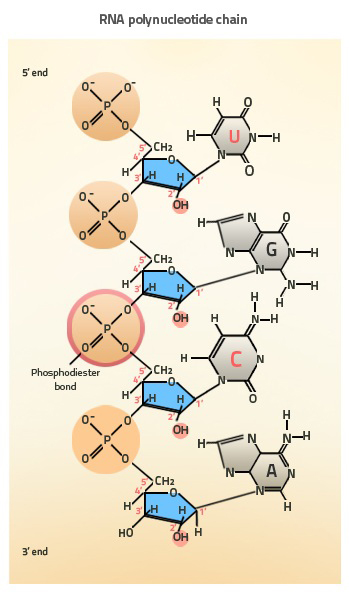 RNA is copied from its complementary DNA strand by an enzyme called RNA polymerase. RNA synthesis proceeds in the 5' to 3' (five prime and three prime) direction. 5' and 3' refer to the position of carbon atoms in the sugar backbone. The 5' carbon has a phosphate group, and the 3' carbon has a hydroxyl group.

RNA is a very ancient molecule, with many different functions in the cell. Hence, there is a large variety of different RNAs.

RNA structure is very similar to DNA, however, there are some very important differences between RNA and DNA.