The Species-Area Relationship (SAR) describes the relationship between the area of a landscape, or part of a landscape, and the number of species found within that area. The area must be contained and are often described as islands or patches within a large landscape.

From the SAR curve shown in Figure 1, you can see that the number of species within an area tends to increase with the size of the area. In smaller areas, the increase in species is due mainly to colonization, while in larger areas, the increase in species is a function of speciation. When constructing an SAR curve, often only a sub-category of species are selected to analyze.

The general power-law model for SAR is:

SA = cAz ; where S is the number of species, c is a constant, A is the area and z is the slope of the curve.

The reverse SAR curve can also be used to estimate the extinction rate associated with a given reduction in habitat size. 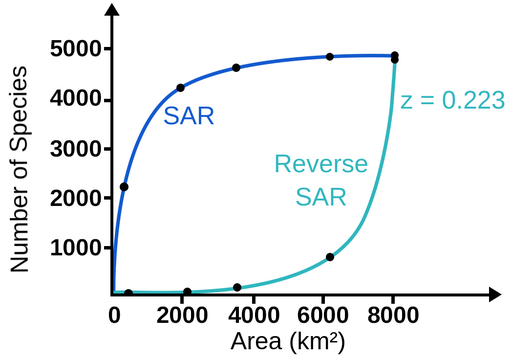