Each movement in the body is the result of muscles contracting and pulling the bones closer together or further away from each other. Most often the movements result from not one, but two or more muscles acting together or against each other. The whole skeletal muscle system is arranged in groups of muscles that produce an immense variety of movements. Each muscle in the group has an equally important function to play.

The prime mover is the muscle that has the biggest contribution toward a particular movement. The contractions of the prime mover cause the desired action, for example, flexion.

The antagonist opposes or reverses a movement that was caused by the prime mover. This muscle usually stretches and yields to the effects of the prime mover, as most of the time it is located on the opposite side of the bone or joint.

Specialized synergists are called fixators. Their main role is to stabilize the origin of the prime mover and enhance its efficiency. Synergists steady the proximal end of a limb while the movements happen at the distal end of it.

It might seem that the prime mover takes all the credit for causing the action. In reality, all muscles in the functional groups are important for smooth, precise, and coordinated movement.

For example, to properly perform elbow flexion, the muscles having all four functions must be working together. The biceps brachii represents the main prime mover, bringing the radius closer to the humerus. The brachialis has a role of a second prime mover, lifting ulna towards the humerus as well. The triceps brachii is the muscle opposing the action, thus acting as an antagonist. The brachioradialis plays the role of a synergist, preventing unwanted twists at the elbow joint, and enhancing the action of prime movers. Finally, the deltoid fixates the movement by stabilizing the origin of the biceps brachii and the proximal end of the humerus.

The function of a muscle depends on the type of movement. In elbow flexion, the biceps is the prime mover and the triceps brachii is the antagonist. However, in elbow extension, the roles reverse and the triceps is the main driver of the action and biceps stretches, opposing the contraction force of the triceps. 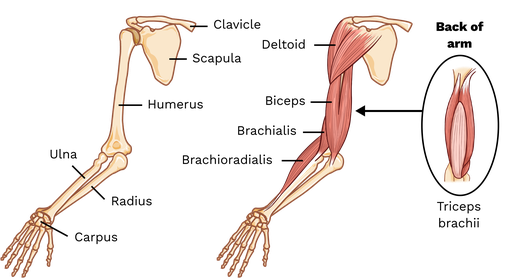