The testes are the primary sex organs, or gonads, of a male. The gonads of both males and females produce the sex cells, known as gametes, and produce sex hormones. In a male, the gametes are spermatozoa, commonly called sperm cells or sperm. The primary male sex hormone is testosterone.

The testes are housed outside of the pelvic cavity in the scrotum, a sac of skin posterior to the penis. Optimum sperm production occurs below core body temperature, so the scrotum provides a lower temperature environment for the testes.

Interstitial cells fill in the space outside of the seminiferous tubules. Although these cells do not directly contribute to sperm cell production, they are vital to the male reproductive system because they produce the hormone testosterone. 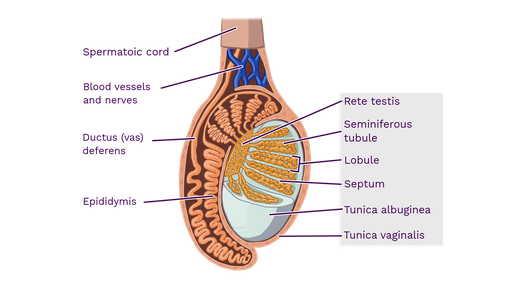