Immune tolerance is the process of training an immune system to not mount an immune response to normal healthy tissues and cells in its own body.

This is achieved by passing candidate B and T cells through a series of antigen exposures then modifying or killing those that mount an inappropriate response. 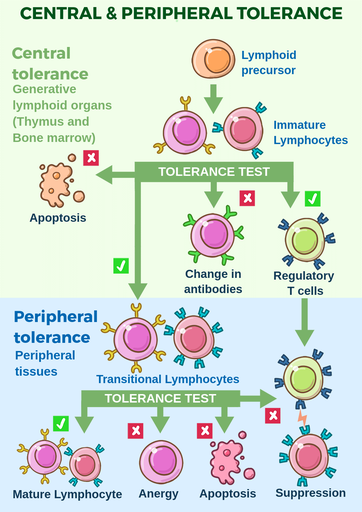 During this stage, cells that bind too tightly to presented self-antigen are eliminated from the immune repertoire by induction of cell death, anergy or for some B cells triggering a rearrangement of the receptor gene to make a new expressable version.

During this process any self-reactive B or T cells that might have sneaked through central testing are eliminated. Sometimes the cells only properly encounter self-antigen in large volume once they emigrate from the primary tissues. Such cells are ordinarily eliminated quickly in the peripheral tissues.
Clonal deletion is the term that is applied to the elimination of B cells that strongly bind antigen in the peripheral tissues and then undergo apoptosis. There is no opportunity for the cells to rearrange their genes at this stage - they simply are removed.