An ecosystem is a community of organisms interacting with each other and with their environment. A community is made up of different types of populations. A population is all of the organisms of one species within a single habitat.

Photosynthesis is the main route by which energy enters an ecosystem. Energy is transferred up the trophic level in food chains and food webs. The food chain describes the relationship between producers, consumers, and decomposers. Many food chains may overlap to create a food web, which shows the interconnection and relationships between feeding networks.

At the base of the food chain are the primary producers. Primary producers are autotrophic organisms that convert solar energy into organic energy. Above the primary producers are the consumers who ingest live plants, and are the prey of other carnivores that are higher up in the food chain. Decomposers, such as bacteria, molds and fungi, obtain nutrients by secreting enzymes to break up the chemical compounds that make up dead plant and animal matter. Both consumers and decomposers are considered heterotrophic, which means they obtain energy from other organisms. 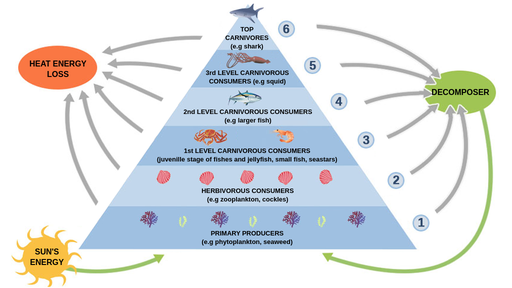 The different trophic levels can be represented using numbers: